Known as Istropolis to ancient Romans and Greeks, Pressburg to German speakers, Pozsony to Hungarians, Prešporok to Slovaks, Wilson City for a short time after breakup of Austro-Hungarian Monarchy, Bratislava got its present name only in 1919. But the city has a long and proud history that dates back to Celtic Culture (about 200 BC).

Bratislava is one of the vertices of the so-called “golden Central European triangle” (the other two are Vienna and Budapest), one of the most promising regions in Europe. Interestingly, Bratislava is the only capital in the world located on the border of three sovereign states – Slovakia, Austria and Hungary. For centuries it has been the intersection of two important historical trade routes, the Danube and Amber Roads.

Bratislava was for 247 years the capital of the Hungarian Kingdom (1536-1783) and for 267 years also the coronation city. In total, the coronations of 11 kings and queens plus 8 of their consorts occurred in the St. Martin’s Cathedral between 1563 and 1830, including that of Maria Theresa of Austria.

In the city itself there is plenty to see and do. The handsome homes of the Austro-Hungarian noble families who built palaces here dot the city, and many of them are now open to the public as museums and galleries. The former seat of the rulers, today the symbol of Bratislava and the seat of the Museum of History – the Bratislava castle – is built on a fortiﬁed settlements of Celts, Romans and Slavs. The castle has been destroyed more than once and is now undergoing a major restoration. There are great views from its 47-metre-high crown tower and its fortiﬁcations over the mediaeval old town and the Danube valley. 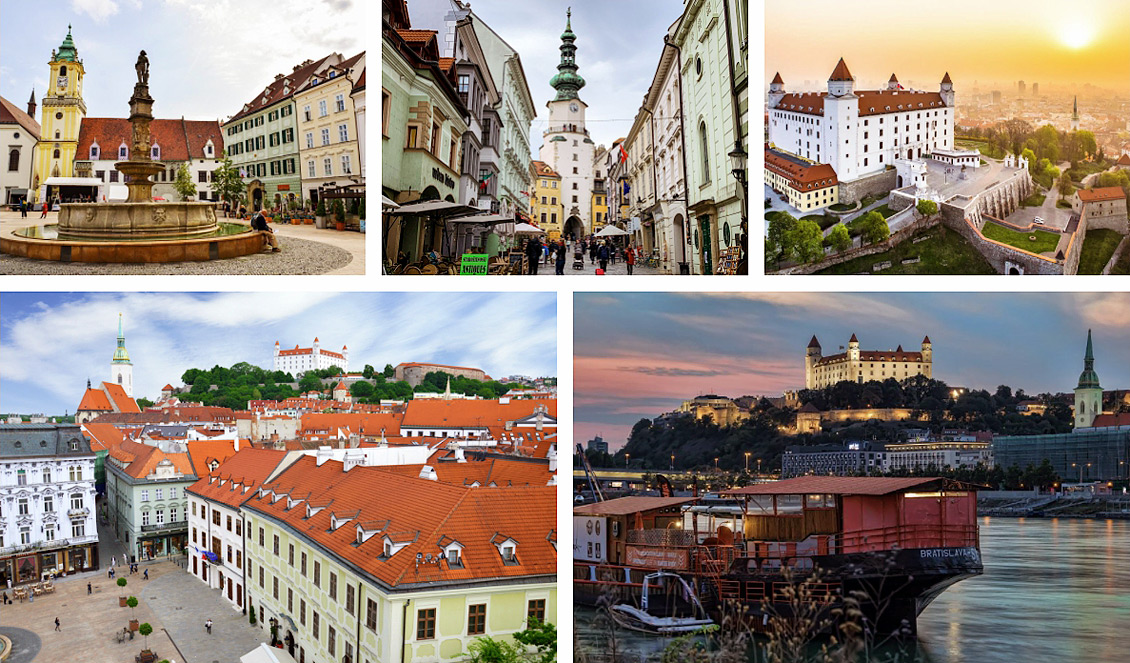 Not many people know, that Bratislava was once one of the most important centres of Jewish learning in Europe. A unique memorial to its most renowned rabbi, the Chatam Sofer, and the city’s Museum of Jewish Culture celebrate this heritage. The memorial is often visited by Orthodox pilgrims from around the world.

Across the river, the unmistakable ranks of concrete housing blocks (“paneláky” in Slovak) with the unique UFO-style SNP Bridge in the foreground represent the architecture of the communistic times. The “UFO” itself contains an eponymous restaurant with bar and observation deck 95 m above the Danube River with amazing views of the city and line of sight up to 100 km. The river is, of course, one of the city’s main assets. The pedestrian decks of the New and Old Bridges are good places to watch the river trafﬁc, including huge Danube barges, glide past. There are several cafés, bars and restaurants along the riverbanks, within walking distance of the centre.

Not surprisingly, the Slovak capital has some of the best restaurants in the country, ranging from simple traditional eateries to elaborate high class dining establishments, and running the gamut from Slovak to international cuisine. Although Slovak wines (except for Tokaj that we share with our Hungarian neighbours) are not well known internationally, they are popular domestically. Slovakia’s crisp, fresh rosés and white wines have won many awards in international competitions.  A look at the eventful history of Slovak wines will help the curious taster appreciate their journey to fame.

Bratislava is at the centre of Europe, in the extreme southwest of Slovakia. The edge of the city actually forms Slovakia’s borders with Hungary, to the south, and Austria, to the west, making it the only capital city to border two neighbouring countries. In addition, the Czech Republic is only 62 kilometres away. The Austrian capital Vienna is only 60 kilometres distant, making them among the world’s closest capital cities.

Bratislava lies on the banks of the Danube, the second longest river in Europe, and at the foot of the Small Carpathian hills. The Middle Danube basin begins at Devín Gate in western Bratislava. The city forms part of the Bratislava Region, one of eight into which Slovakia is divided. The city covers a total area of 367.58 square kilometres. As well as the Danube, which crosses the city from the west to the south-east, the city also encompasses parts of the Morava River, which forms the north-western border of the city and enters the Danube at Devín, the Little Danube, and the Vydrica, which enters the Danube in the borough of Karlova Ves. The Carpathian Mountain range, one of Europe’s biggest, begins in the city as the Small Carpathians (Malé Karpaty). The Záhorie and Danubian lowlands stretch into Bratislava in the west and the east respectively. The city’s lowest point is the Danube’s surface, at 126 metres above sea level; the highest point is Devínska Kobyla, at 514 metres. The average altitude of the city is 140 metres.

More information can be found here.